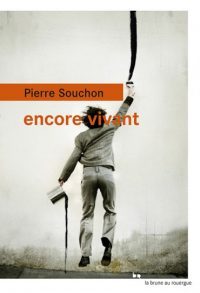 This first novel by Pierre Souchon is thundering, intense and violent and at the same time endearing, warm and overwhelming; it resounds with cries, tears and immense pain, and at other times, releases bursts of laughter, derision, nostalgic emotions, sensitivity and specks of happiness.  — Actualitté

A bitter, intense and overwhelming debut story, “Still Alive” catches you from the prologue: it is impossible to let go of this text, and like the main character, you are constantly holding your breath. — Page de libraires

“STILL ALIVE is the story of a man who for a long time believed – wrongly – not to be in his place … This lack of self esteem led him to madness … It could be appalling – madness and the imprisonment – but what strikes us is the profound humanity that permeates the whole narrative. Humanity towards his companions in misfortune, his family – in particularly that father who we would all like to have – and caregivers who “led him out of the night”. ” — L’Express

A revolving text with Celinian accents… Without detour or concession, his prose oozes rage and revolt. With a lot of humor and a squeaky lucidity, Pierre Souchon offers a baffling journey to the gates of social and mental alienation. — L’Express

He had sworn never to return to the psychiatric hospital. But the narrator has only just got married to a girl from Parisian high society and found himself a job as a journalist when he suffers another bout of manic depression and is carted back off to a psychiatric hospital. When this first happened to him at the age of twenty, he was diagnosed as bipolar. And so he once again finds himself among the ‘loony’ paranoid types, the alcoholics and the poor and downtrodden, among them François, James, Matthias and Pounévelle whose terrifying yet sometimes funny portraits he paints for us. This autobiographical narrative from Pierre Souchon is full of both rage and humour, bringing out the profoundly human nature of each character. It is rare to read something so powerful about psychiatric illness and its ravages, as experienced from the inside. The writing is flamboyant, there is a real feel for drama and dialogue, and the tone and attitude are steeped in rage.

Pierre Souchon, 35, is a journalist at Le Monde diplomatique and L’Humanité. Originally from the Ardèche, he has poached in rivers and among the grande bourgeoisie, hunted thrushes and frequented a number of hospitals. Encore vivant is his first novel.