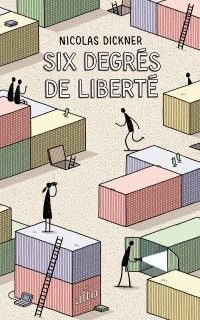 “Brilliant, light and with poetic moments of pure reading pleasure! We read it with a smile, this is a book that makes you happy. This must be done when it comes to containers.” – Anne Michaud, Bernier et Cie, Radio-Canada

“Nicolas Dickner surprises us until the last page, the novel resembles a quest for the absolute bringing together high technology and humanism , 21st century version.” – Jean-François Crépeau, Le Canada Français

“While the brilliant author of Nikolski describes his new book as using ‘the same arsenal in a different way,’ Six Degrees of Freedom is nevertheless vintage Dickner. The book is propelled by the same acute intelligence, the same precise and flowing style and relentless pacing, the same pleasure in literary detours tinged with irony, the same geek culture and ‘culture’ culture, the same slightly off-kilter universe populated by hackers, loners and obsessives.” – Josée Lapointe, La Presse

“The formidable analytical mind of Nicolas Dickner is what marks him as one of the most interesting writers of his generation. This incisive intelligence, coupled with an irresistible humour, runs through the whole novel, taking us to places we never thought possible. All you have to do is let yourself go.” –Martine Desjardins, L’Actualité

Lisa was Erik’s first hack. Both raised in a small town, the two kids soon became inseparable, despite their diferences. Erik is the lonely type, always hidden behind a computer screen, coding under the scrutinous eyes of his two pet budgies. While she’s dreaming of travels and leaving her boring village to see the world. Ironically, Erik will be the first to leave for Denmark with his mother. There, he’ll be recognized as a reclusive genius of programming. Lisa will move on but still remains stuck without any money to fulfill her dreams of travels. One day, she decides it’s time to go. Erik and her will find a way to get her to travel in the shadows of our system… hidden from the rest of the world in a container. With the CIA and the RCMP suspecting the container to be dangerous, the race for Lisa begins…

One of the most original voices of his generation, Nicolas Dickner has woven an intricate and fast-paced tale about individual freedom and the quest for meaning in a world where everything is planned, coded, organized. Can we live and not exist ? Filled with wit, humor and quirky thoughts on modern life, Les six degrés de liberté is a delicious romp through our egotic times in the spirit of Douglas Coupland, Irvine Welsh and Nick Hornby.