Singular Pasts: The "I" in the writing of history 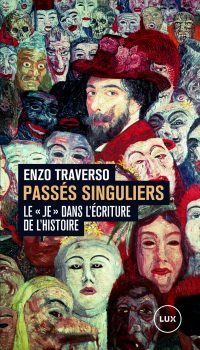 Singular Pasts: The "I" in the writing of history

In any case, Enzo Traverso refrains from making an indictment against these new historical writings; he says that he is not writing against them, but that he wonders why they emerged; and he does so with a gentle irony that is quite delightful, invigorating, and scholarly. — L’Humanité

[…] he gives back to the debates that have agitated him all their political depth by making this new historical narcissism the symptom of a deeper diagnosis: that of a loss of the collective sense of history. — En Attendant Nadeau

More and more often, the “I” slips into history books and causes a strange hybridization with novelistic style. Enzo Traverso examines this “historical narcissism,” spotted in the work of Ivan Jablonka or Philippe Artières, and tries to understand its origins, with an acerbic wit. — Les Inrockuptibles

We study history because we can’t get rid of it, because the past works on us in the present. We write novels for nearly the same reasons. This attitude also reflects the signs of a change in our connection with the past. The historian joins the memorialist while the writer fulfills himself in rewriting the past. Should we be worried? Not when things are clearly stated. One can even consider that it makes the readers happy when they approach new territories in this way. Enzo Traverso would simply like for authors to be made aware of this. Instead of the “I” of the novel, he prefers the “we” when it comes to history. But the lover of literature does not lose his pleasure when a researcher upsets his research with style, and his stimulating essay allows us to understand the orientations of historical works as well as the editorial production that results from them. — Livres Hebdo

The problem is not that historians write in the first person, but that they transform this choice into a norm, a kind of historiographic model. — Marianne (interview)

More and more, history is being written in the first person. Historians no longer simply reconstruct and interpret the past; they now feel the need to tell their own stories. The number of historians’ autobiographies has increased in the last century, and researchers have adopted a self-reflexive stance to better understand their own intellectual trajectory. A new hybrid genre has taken form, exemplified in particular by the works of authors such as Ivan Jablonka in France or Mark Mazower in the English-speaking world: historians recount their investigations and describe the emotions they stirred up in them, thus joining the novelists who borrow from the methods of historical investigation (Carrère, Cercas, W.G. Sebald, etc.).

This surge of the self upsets historiography and raises questions about the world in which we live. The era of the selfie transforms human sciences and the neoliberal way of thinking provokes a subjectification of social relations and of the apprehension of the past. A new regime of « presentist » historicity emerges, characterized by a withdrawal of the historian into the sphere of the intimate, an absence of future and a melancholic gaze turned towards a discontinuous past where the political is secondary.

Enzo Traverso questions this subjectivist shift and highlights its creative potential and political ambiguities while identifying its intrinsic limits.