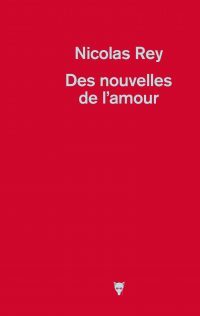 It would be a mistake to reduce Rey’s literature to contemporary banter; books that are fashionable, perishable. He writes love without lying (to himself). He dwells relentlessly on the sad workings of men and women who love each other, get bored and break up. (…) He says: “We are children who get old.” His books stay young. Read Nicolas Rey. ­– Les Inrocks

These short stories are like flashes, they illuminate an emotional impulse, a sex plan, a breakup. — Marie Claire

Like Raymond Carver, who he reveres, Nicolas Rey sees the short story genre as a space with endless possibilities.

Short stories of our times, in Paris and forgotten villages, housewives, workers, unemployed people, artists… Nicolas Rey invents derisory lives and lends them his tormented, neo-romantic sensibility to make them even more sublime.

With a Fitzgeraldian soul, he is fighting his demons. In his writing and in his life: excess in all genres, “a lovers hypersensitivity that tries in vain to couple with the voracious need for sex” (Les Inrocks), melancholic states…