Shoba. The Journey of a Refugee 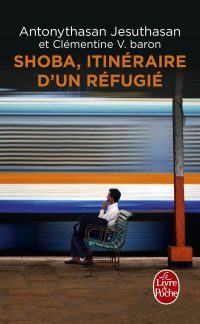 Shoba. The Journey of a Refugee

It opens our eyes to the lives of these people that fled the war and only wanted one thing: to live in peace. Their lives are a lot easier than ours. Without a doubt, we oh-so-perfect Westerners will no longer say that these foreigners are coming to our country to profit off our system and live off our backs. – Culture Luxembourg

Today, I am in exile, but I have a lot of freedom. So yes, I am nostalgic, I miss a lot of things, but the most important thing is to cherish this freedom of expression I have here. I feel this deeply. -Antonythasan Jesuthasan, interview for La Fringale Culturelle

This is a book to read because it’s a rigorous document on what happened for 30 years in Sri Lanka, on a personal and painful journey, on what is still, without doubt, the reality of this country today, always subject to archaic political divides, and finally on what people are capable of doing or enduring. – Oblivion

His testimony is a way to open our eyes to the lives of refugees, far from being a distant fantasy. Never does the writing turn to melodrama to try and get readers to shed a tear. Despite the tortures (suggested, never described) and the distress, he never dwelled on it. That is perhaps just what makes his account so powerful—-or maybe it’s the fact that nothing seems added, or even that everything sounds so terribly true. – Trendy-Show

His account, edited by Clémentine Baron, is an open window to the reasons and journeys of these refugees that official discourses tend to change into vague abstraction. – Alexis Broca’s, – Le magazine Littéraire

He takes up arms, leaves his family, and joins the rebels of the Tamil Liberation Movement. However, they are thrown into a spiral of violence, attacking civilians, and Shoba no longer wants to support their actions. How does he leave without betraying his own? – Centre Presse

Sri Lanka, the country Jesuthasan left 28 years ago and where his mother still lives, will always play a role in his work. – Le Parisien

I only write 50% of what I would like. It’s still dangerous for my friends in Sri Lanka. But hopefully one day I will be able to write it all.” – L’OBS

In Sri Lanka, the Sinhalese and Tamil populations are trying to live together side by side. In 1972, a new government comes into power and gives all the rights to the Sinhalese. Civil war ravages the country. Like thousands of young Tamils, Anthonythasan, nicknamed ‘Shoba’, leaves his family to take up arms and join the Liberation Tigers of Tamil Eelam (LTTE). But he is quickly disillusioned. The militants are trapped in a spiral of violence, taking civilians hostage. But can you leave the militants and return to a normal life? Persecuted by his former comrades, Shoba resigns himself to exile.

From the shores of Velanai Island to the city of Paris, via the streets of Hong Kong and the prisons of Bangkok, this book recounts the journey of a Sri Lankan refugee, simultaneously in love with his country and in search of a safe haven.

Antonythasan Jesuthasan is a Tamil writer and actor, born in Sri Lanka in 1967. He played the leading role in Jacques Audiard’s Dheepan (Palme d’or at the 2015 Cannes Film Festival).