As You See Me. The Story of a Girl Who Was Meant to Be a Boy 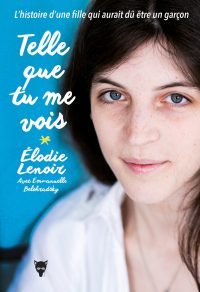 As You See Me. The Story of a Girl Who Was Meant to Be a Boy

A true lesson of life, courage, and love. — Janette Magazine

The fresh and touching account, full of humour, of a young girl who discovered at the age of fifteen that she should have been born a boy. How to construct a life as a woman after this discovery? Could you forgive your parents for hiding the truth?

When she was fifteen, Elodie was worried about not getting her period. The gynaecologist she went to see was confused: the scan showed that Elodie did not have a uterus. Her parents’ anxiety was palpable when she told them the news. Because they had known, since Elodie was four, that their daughter had a rare condition: Androgen Insensitivity Syndrome (AIS). Her genetic makeup is masculine – she has an XY karyotype – but her cells contain no receptors to respond to male hormones, preventing her from developing into a male baby as a foetus.

On the outside, Elodie looks like any other girl. But inside, she has no uterus, no fallopian tubes, no ovaries. How can you feel like a woman without the organs that usually define femaleness? How can you carry on as normal when you find out that nature meant for you to be a boy? And what would we have done, each one of us, in her parents’ place?

In this book, Elodie tells the story of her ‘old’ life with humour and wit. The unimaginable moment when she found out about her condition. Like Jim Carrey in The Truman Show, she found the experience both devastating and absurd. And what came next, putting a question mark over her entire identity.

Elodie is now 28 years old and at peace with her story. This touching account is a powerful demonstration of the words of Simone de Beauvoir: “One is not born, but rather becomes, a woman”.

Elodie Lenoir is 28 years old. She has a rare condition (AIS: Androgen Insensitivity Syndrome): born with the genetic makeup of a man, her body developed into that of a woman. She only learned the truth at the age of fifteen.

Emmanuelle Belohradsky is a screenwriter and journalist. She met Elodie several years ago when carrying out research for a film, and convinced her to share her story.