Same Side Selling: How Integrity and Collaboration Drive Extraordinary Results For Sellers and Buyers 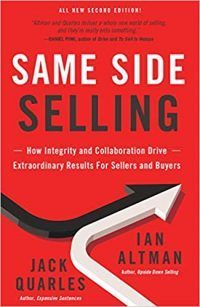 Same Side Selling: How Integrity and Collaboration Drive Extraordinary Results For Sellers and Buyers

“Within three years of adopting Same Side Selling, our sales grew from $17M to over $100M without adding a bunch of salespeople.” —Howard Rogers, CEO & President of BrightClaim

“Executives with P&L are much more likely to choose vendors that adopt the cooperative tactics explained clearly in Same Side Selling. This book benefits buyers and sellers alike.” — David Clevenger, Director Denali WNS

“Since we’ve incorporated Same Side Selling and placing a high focus on our clients’ results, our own results have skyrocketed. Overall sales have increased 400% and we grew 80% this year alone.” —Sean Farrell, CEO Quality Data Systems

Are you tired of playing games with your customers?
The most widely used metaphors in sales are those related to sports, battle, or games. The challenge with this mindset is it requires that one person wins, and the other loses. Instead of falling victim to a win-lose approach, what if you shared a common goal with your potential client? How might things change if the client felt that you were more committed to their success than making the sale?

Does it sometimes seem like you and your client are working against each other?
Same Side Selling gives practical steps to break through sales barriers and turn confrontation into cooperation. Sellers that implement the Same Side Selling approach will be seen as a valuable resource, not a predatory peddler.

A Different Type of Book on Selling
What makes Same Side Selling different from any other book on this topic is that it is co-authored by people on both sides : a salesman (Ian) and a procurement veteran who understands how companies buy (Jack). The buyer s perspective is baked into every sentence of the book, along with the seller s point of view. Our aim is to replace the adversarial trap with a cooperative, collaborative mindset. We also want to replace the old metaphor of selling as a game.

The New Metaphor: Selling Is a Puzzle
Same Side Selling is the idea of solving a puzzle instead of playing a game. Discover how to sell with integrity from the same side of the table for better results all around.

Ian Altman is called on by businesses around the world as a keynote speaker on modernizing business growth with integrity. Ian started, grew, and sold his prior companies from startup to values beyond $1 billion. Ian has a degree in Quantitative Economics and Decision Science from the University of California San Diego.

Jack Quarles is a consultant, speaker, and trainer on procurement and decision-making. His bestseller, Expensive Sentences, has received numerous national awards and international translations. Jack has saved companies tens of millions of dollars, Jack has degrees from Yale and Kellogg Business School.