Qadir’s Last Marbles. The True Story of a Father on the Run 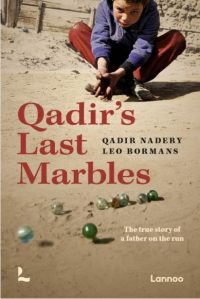 Qadir’s Last Marbles. The True Story of a Father on the Run

“Leo Bormans and Qadir Nadery give a vivid account of a fascinating story that would otherwise have gone untold. This book is a significant act.” — Kader Abdolah, bestselling author

The incredible story of a young man in Afghanistan and his escape to Europe.
Written in a sober but vivid style that shifts between a fairy tale and harsh reality
For readers of Hosseini’s The Kite Runner

Young Qadir grows up in a small village in Afghanistan with his mother’s tales of dreams and his father’s iron determination. All he owns are eight marbles. War is all around them, killing many loved ones. Qadir survives by working for the international troops who come to liberate his country, until he too has to flee from the violence with his wife and children, with the Taliban hot on their heels. They cross mountains and seas, finally reaching Europe after three months. But the Great Gatekeeper refuses to let them in. One by one, Qadir loses the jingling marbles of his life. And yet there is hope.

Qadir’s Last Marbles is a fictionalised account of a true story. The story starts right in the middle of the action in 2015, during a crucial part of the journey when the family is crossing the sea in a rubber boat. After these first three pages, we return to 1989 and the world of eight-year-old Qadir.

The chapters that follow (divided into four sections, each named after a gemstone) present his moving life story, jumping back and forth in time. They show him growing up in the war and how that war scarred him for life. We read about him leaving his little village of some twenty houses at the age of twelve to earn a meagre living, first working at a garage forty kilometres away and then moving to the dangerous city of Kabul. We learn how he worked for international organisations, which exposed him increasingly to threats from the Taliban. We find out how he finally married Salima in 2010 and, after years working in the capital, inevitably has to flee to a safer world with their three children.

The book goes on to describe the asylum application process in detail: the endless waiting, the rejections, the cathartic good news. For him, at any rate…

This book was not simply ‘written down by’ Leo Bormans (as is so often the case in true-life stories like this one). It is the product of an intense friendship between the two authors, a book in which every sentence was a joint effort. They spent a whole year working together on this story.