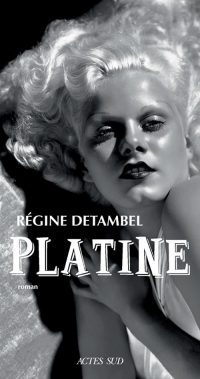 While the film industry is only just beginning its belated process of moralization, Régine Detambel’s work resonates much more powerfully than a simple biography. It is also a contemporary and redeeming form of political manifesto. – Leonard Billot, The Inrockuptibles

A short novel, never losing sight of it’s target, Platine flies like an arrow whose path depends solely on the ability of the archer to combine science and instinct. Through the destiny of an actress delivered to an audience that claims to worship her, the arrow launched in the first pages of this novel is heads straight for it’s target: the oppression of the female body through the golden age of Hollywood. It’s journey hisses all the more powerfully as the book, by pure chance, has come to the surface in the midst of the Harvey Weinstein affair – Bertrand Leclair, The World of Books

As if she was throwing herself, and us with her, into the mad rush of a too short existence, Regine Detambel never lets up on a cavalcade story that does not force the line for an instant. A very tender and gentle novel – Isabelle Spaak, The Literary Figaro

Régine Detambel paints a unique, empathic and magnificent portrait, she uses her unusual literary power to portray, as accurately as possible, the true story behind this rising star – Jean-Claude Raspiengeas, The Cross

This novel traces the history of cinema, beginning with October 1927, a fatal period for many actresses and actors of the silent cinema. Régine Detambel goes from one character to another with Jean Harlow under the spotlight as she struggled through her complicated relationship with life. Throughout the course of this turbulent piece, the author alludes to various worldwide events of the early 20th century. – Brigitte Aubonnet, Roving Inks

In the America of the Great Depression, Harlean Carpenter, a smart and pretty girl whose hair has been bleached by the Californian sun, became Jean Harlow, the first sex symbol of the talkies and a rising star who was brought down in her prime by illness. Constantly mired in scandals, trapped in a frighteningly intense relationship with her mother and abused by an incestuous pimp of a stepfather, she was a beautiful woman who aroused excessive desire (and therefore vilification), but who above all wanted to attain a sense of self-worth, despite the distorting eye of the camera and the obscene correspondence she received from her public, and to take pleasure in her own body, despite the diktats of the make-up artists and the unforgiving spotlights. Through this depiction of the life of an actress crushed by the system and a freely imagined vision of Hollywood in the 1930s in 24 chapters, echoing the frame rate of 24 images per second of the movie cameras, Régine Detambel surgically dissects the flamboyant and pitiless emblem of the oppression of women.

Born in 1963, Régine Detambel has been creating a literary oeuvre of the first order since 1990. Most of her works have been published by Julliard, Le Seuil and Gallimard. A Chevalier des Arts et des Lettres, Régine Detambel is also the winner of the Prix Anna de Noailles awarded by the Académie française. Actes Sud has published two of her essays, Le Syndrome de Diogène : éloge des vieillesses (2008) and Les livres prennent soin de nous (2015), and four of her novels: Son corps extrême (2011), Opéra sérieux (2012), La Splendeur (2014) and Le Chaste Monde (2015).