AN OBAMA’S JOURNEY: My Odyssey of Self-Discovery Across Three Cultures 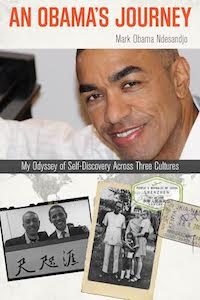 AN OBAMA’S JOURNEY: My Odyssey of Self-Discovery Across Three Cultures

The book is captivating. It gave me new insights into Mark’s life with his half-brother,

“President Barack Obama, as well as the limited time that he had with his father, Barack Obama, Sr. This book is a compelling read for those who are very interested in learning more about President Obama and his family, as well as the work Mark has done. I had the pleasure of meeting Mark during a visit to Shenzhen, China a few years ago and he is a remarkable person. When you read this book, you’ll get a good sense of him, of the family history, and for his commitment to justice and equality. I hope that you will enjoy the book, the pictures, and the story about the Obamas.”—Charles J. Ogletree, Jr., Jesse Climenko Professor of Law; Founding & Executive Director, Charles Hamilton Houston Institute for Race & Justice

In his remarkable memoir, Mark Obama Ndesandjo recounts his complex relationship with his older half- brother, President Barack Obama, including their first meeting in Kenya over twenty years ago. This memoir also sheds new light on the Obama family’s history, including a critical analysis of Dreams From My Father by Barack Obama.

Through the author’s detailed descriptions of their intense meetings, he offers the reader a glimpse at the man behind the 44th President of the United States of America. He also discusses their shared mixed race origins: like the President, Ndesandjo is American and has a white American mother, Ruth Ndesandjo née Baker, a Jewish woman who was Barack Obama Sr.’s third wife. His memoir also offers the author’s inspiring personal story about identity and multiculturalism. Mark’s journey of self-discovery took him across three cultures: Kenyan, American and Chinese. While growing up in Kenya, he was very close to his Jewish-American mother and grandparents. This brutally honest look at the author’s past, which includes life-changing moments and poignant reflections of one man’s search for his true purpose, renders a portrait of the world we live in today, one of increasing globalization.