No Longer Lives at this Address 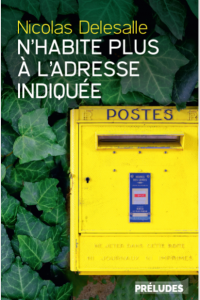 No Longer Lives at this Address

An unusual and touching story rooted in a reality that is both harsh and poetic.  Told with both humor and affection, these extremely moving portraits of men and women just like us prove that Nicolas Delesalle is one of those writers who knows how to help those who are suffering to rise above.

The first time she received an anonymous love letter, Sissi was incensed. For a mail-carrier, it was particularly ironic! As a divorced woman in her late 50s whom no one would take for a movie star and who has been profoundly affected by her son’s accident, she would like to know exactly who has the nerve to be toying with her feelings like that!

Luckily, Sissi can count on her colleagues to help her, especially her best friend, Simon. He’s the one who talks about her best, about their daily life at the Post Office, their own little world with Dine, who’s hard to see behind her tattoos; Luc, whose sense of humor is both dark and lousy; Paolo, the ecologist-baker-philosopher, and Martin, the family man on the edge of a nervous breakdown.

So when the passionate letters keep coming, the group of friends decides to investigate. To the bitter end, and the final revelation… Even if it, as turns out, they might have preferred not to know.

Nicolas Delesalle (1972) was a journalist for Télérama and editor-in-chief of the (2-volume) work, Télérama 60 ans published by Arènes, before joining Paris Match.