The Nightlife of Ava​ 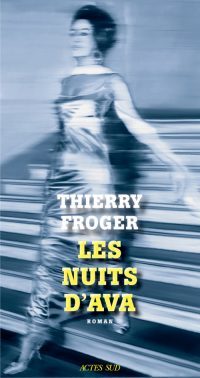 The Nightlife of Ava​

Rome, August 1958. In between shooting her latest film in Spain, Ava Gardner invented the dolce vita which Federico Fellini went on to turn into the subject of one of the first great films of the modern era. One very drunken night, she drags her director of photography Peppino Rotunno off for a photo shoot inspired by the great nudes in the history of art. Roughly a century earlier, Gustave Courbet, had also invented something rather different…

Following the quest of an eccentric historian to track down these (real? apocryphal? lost?) photos in the 1990s, this novel explores how images, reminiscences, memory, icons, symbols and secrets are manufactured.

Les Nuits d’Ava spans the four decades in which our age was invented, encompassing the heights of Hollywood glamour and a doubt-ridden provincial adolescence, and the dizzying highs of glory and the abject depths of solitude, while exploring the ideological divide between two French generations and the corrupt corridors of American power.

A whirlwind of a novel blending fact and fiction and depicting the squandering of an inheritance in both the literal and the figurative sense. An enchanting novelistic adventure of rare elegance and richness.

In 2016, Thierry Froger made a big impact with his first novel Sauve qui peut (la révolution), which received enthusiastic reviews and won the Prix Envoyé par la Poste. It cast Godard and Danton into the whirlwind of history and social revolt. In 2014, his poetry collection Retards légendaires de la photographie (Flammarion, 2013) won the Prix Henry-Mondor awarded by the Académie française. Les Nuits d’Ava is his second novel.