Never Alone. The bugs that build plants, creatures and civilizations 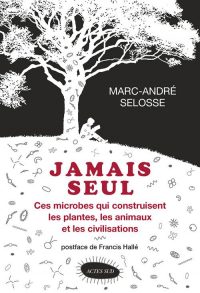 Never Alone. The bugs that build plants, creatures and civilizations

Of course not all the content in this book is easy, but all is enrapturing. Once we have accepted that the plants and animals are not autonomous entities, but beings in symbiosis with so many other tiny organisms, we see the world differently. Not in permanent competition but in close-knit association where mutual living dominates. – Françoise Monnier, LIRE

Over the course of this enthralling book, the author carries us away on an adventure illustrating at what point this constant of omnipresence and universal cooperation among microbes applies to all fields of modern biology. — Bernard Schmitt, Pour la science

This sort of book is pretty rare, one that radically changes your view of the world. The sort of book that re-evaluates things that once appeared obvious, things that we took for granted since childhood. Marc-André Sélosse’s Never Alone accomplishes this. — Hugues Belin, L’ECHO

Dizzying, fascinating, witty, to give it a few words, submerging us into the world of these small, vibrant organisms. — Aude May Lepasteur, Le Quotidien Jurassien

Marc-André Selosse, professor at the National Museum of Natural History in Paris, knows all this history by heart. And knows how to tell it. — Jean-Luc Nothias, Le Figaro

A voyage into the world of symbiosis that changes our view of living things. — Laure de Hesselle, Imagine demain le monde

A fantastic restitution of the role microbes play in all life! — A fond la science

This work is dense, often witty and sometimes puzzling in its approach, shoving away many preconceived notions. — Le Figaro Santé

Never Alone is an adventurous book… With passion and much humor, Marc-André Selosse tells us the history of the world. — Francis Martin, La Recherche

​This work takes the reader through the world of bugs, germs and microbes and their role in the lives of plants and animals. It is also a journey through the history of 20th century science.

Bugs and bacteria are the root of many illnesses. But recent research in biology has revealed that instead of disturbing organisms and creating infection, they have an essential role to play in the sustenance of life. Every creature or plant on the planet is inhabited by bug-life which enables them to carry out varied, vital functions aiding nutrition, development and immunity. Their presence has an influence on animal behavior and, on a larger scale, contributes to the creation of populations, ecosystems, societies and their dynamics.

Since this research plants and animals, including human beings, have stopped being considered as autonomous entities.

The fact that we are caught in a mutually supportive relationship with the bug-world is not all bad news however. Not all these interactions are negative and instead of competitive, parasitic and predatory relationships, there is deep symbiosis taking place.

The work tells the tale​ ​of a major revolution in science which will change readers’ perspectives of the bacterial world.

It sheds new light on the ecological processes around us. It is a tribute to the need for interactions between living species and homage to their diversity and subtle functioning.