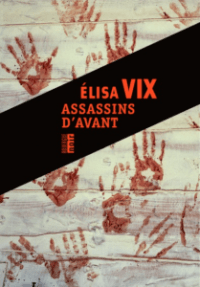 March 1989. Marie Moineau, a young primary school teacher, is killed in her classroom by a ten-year-old pupil, Ladji Keita, who is himself run over by a motorbike and killed as he attempts to flee from the police. Twenty-five years later, her daughter Adèle, who was five years old when her mother died, decides to investigate her death. Who was Ladji Keita, how did he manage to smuggle a weapon into the school and what drove him to attack his teacher? Adèle tracks down a former pupil, Manuel Ferreira, who witnessed the murder and has since become a police officer. She asks him to help her with her investigation; meanwhile, he begins to fall in love with her. But Manuel is clearly keeping some of the facts from Adèle and everything begins to point to him having been involved in the murder.

Born in 1967, Élisa Vix is the author of La Nuit de l’accident (2012, Prix Anguille sous roche 2012), L’Hexamètre de Quintilien (2014) and Ubac (2016). She has also published five novels in the Thierry Sauvage series, including Rosa mortalis (2013) and Le Massacre des faux-bourdons (2015), published by Le Rouergue. Part of this series has been adapted for television by France 2.