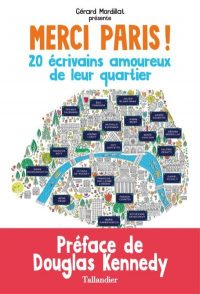 From Apollinaire to Léon-Paul Fargue, Georges Pérec and Patrick Modiano, the city of lights has been celebrated on countless occasions by poets over the centuries. Twenty contemporary writers have now taken up their pens to declare their love of the neighbourhood in which they live.

Inspiring, pulsating and creative, Paris has long been a beacon which attracts great artists and inspires beautiful literature. In this collection, 20 novelists describe their little corner of Paris with tenderness, humour and enthusiasm – the neighbourhood which has left its personal mark on them. 20 writers with fond memories of 20 arrondissements and the people, places and atmospheres that have inspired them.

Tatiana de Rosnay takes us for a walk from the 7th of her childhood to the 7th of today; Karim Miské shares an amusing take on his nocturnal life in the 3rd; Franck Courtès describes how moving back into the 5th was like returning to his village; the writer and traveller Julien Blanc-Gras paints a comical portrait of the cosmopolitan 19th; and Douglas Kennedy recalls how he pitched up in Paris at the age of 20 without a penny in his pocket and began to write. He hasn’t stopped since.