Material Matters. The alternative to our society of overexploitation 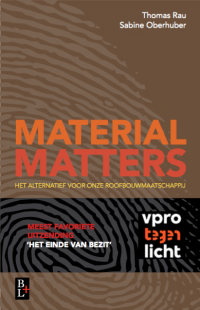 Material Matters. The alternative to our society of overexploitation

Architect and activist Thomas Rau uses his tenacity and pure intuition as to what the future holds to help shape a resilient economy for the Netherlands. — Trouw

[Rau and Oberhuber] would rather pay for prints than for a printer, for light rather than for a lamp. […] They invented a whole new economic system in which we only use products instead of possessing them. Philips is already participating. —Algemeen Dagblad

Rau looks at the major global issues in the fields of ecology, economy and environment, and reflects on the linear production system which creates gigantic waste. [He thinks] about a system that doesn’t cause these problems. What is interesting is that Rau not only thinks about it this system, but experiments with this new circular system in his own work. […] Rau is a visionary in the sense that we desperately need the circular economy. […] There is still much to learn about how to bring the circular economy in practice. —Managementboek.nl

An inspiring and relevant book. […] We live in an age of skepticism, doubt, negativity and populism. However, only an agenda of hope will take us further. You make an important contribution to this. — Jan-Peter Balkenende, former Dutch prime minister

Circularity is the new magic word when it comes to sustainability. —NRC

This could be a reversal of all economic values. — VPRO Tegenlicht

The alternative to our society of overexploitation

Material Matters is an exciting exploration of how we consider our role on Earth. A revolutionary book that turns the world as we know it upside down.

In nine chapters of compelling examples, Thomas Rau and Sabine Oberhuber work step-by-step towards a new economic model: a world where the consumer is no longer the “owner” but the “user”, where materials have rights and trash is a thing of the past.

A utopia? Apparently not. Material Matters outlines a model to make this revolution possible. In several cases, Rau and Oberhuber show that a future-proof world could be closer than we think.

Material Matters tackles complex issues, but the writing is accessible and compelling. It is sure to appeal to people who live by the motto “Don’t own, enjoy!” and who are open to challenging and revolutionary ideas.

Thomas Rau (architect) has been described as the most radical master builder in the Netherlands. He designs buildings that produce energy instead of consuming it and created Europe’s first ‘circular’ building. In 2016, he was nominated for the World Economic Forum’s Circular Leadership Award. Rau is one of the most in-demand guest speakers in the Netherlands. The VPRO programme Tegenlicht invited him to explain his ideas. The programme was voted the most popular offering of the season.

Sabine Oberhuber (economist) set up Turntoo, the first Dutch company specialising in the circular economy, with Thomas Rau. Oberhuber studied at the University of Münster and at the ESCP European Business School. 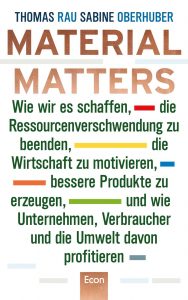 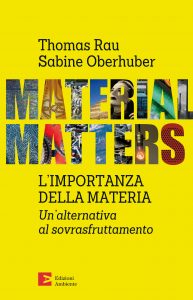