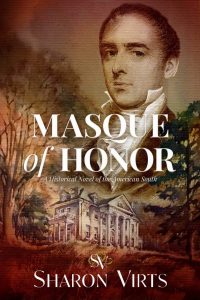 Powerful and compelling. Her characters step off the page and into your life.—Anthony McCarten, award-winning novelist and screenwriter, “The Theory of Everything,” “Darkest Hour,” and “Bohemian Rhapsody”

A spicy stew of ambition, envy, honor, courage—and love—as two brothers-in-law drive step by step toward an explosive choice. This is fascinating fiction based on facts, and Virts’ writing will captivate readers. —Pamela Binnings Ewen, author of The Queen of Paris, The Moon in the Mango Tree, An Accidental Life, and Faith on Trial

Sharon Virts is a natural storyteller and evocative writer with a keen eye for historical detail and drama…an epic tale of romance, politics, ambition and power. —Susan Koch, EMMY and Peabody award-winning filmmaker

In this first novel by Sharon Virts, two sons of the Virginia aristocracy risk it all to defend their dreams and determine their own destinies. Virts builds complex characters and crafts vivid images that capture the heart and imagination.

In Masque of Honor, General Armistead Mason and John “Jack” Mason McCarty are brothers-in-law, second cousins and descendants of founding father George Mason IV. Ambitious and headstrong, together they set out to find love, acceptance, and honor on their own merit. Armistead — by nature a politician — demands respect and strives for perfection. Jack–by inclination a rover–looks to forge his own path. When Armistead is challenged by corruption in the political machine and is denied a seat in the US Congress, the two become embroiled in a bitter dispute that sets in motion an irrevocable chain of events, leading them to the dueling grounds and an outcome that changes everything.

Based on historical events of the 1819 Mason-McCarty duel, Masque of Honor is a story of courage, conviction, and the cost of sacrificing one life to forge another.