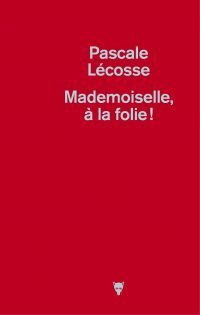 A sensitive novel, full of verve, whose characters, unspeakably endearing, will haunt you for a long time. A favorite of this Rentrée Littéraire. An absolutely shocking, fair, and sensitive novel that treats the malady from an original angle and steadily avoids the pitfalls of pathos. Read it! — Karine Fléjo, Les chroniques de Koryfée

This (almost) closed-door novel looks like a play. Moving from light comedy, it ends up in tragedy at the fall of the curtain… A novel about madness, about a devastating disease against which nothing can fight, Madly, Mademoiselle! is also the story of an unconditional friendship, in life and in death.  — Books, mood and more

An equally sensitive and funny look on a slow descent to the dark pits of lost memory. — L’Humanité

Pascale Lécosse, a great connoisseur of theater, has nourished with her memories and given life to Catherine, an Actress with a capital A, a superb and admired diva who sinks into madness, and Mina, her confidante and best friend. — Le Parisien

A moving duet of two women caught in an intimate tragedy, reminiscent of Françoise Sagan’s light but profound writing and the concise reserve of Marcelle Sauvageot’s Commentary (A Tale).

Catherine is soaring at the peak of her existence. Unique and admired, she has kissed the most desirable actors and acted in the most successful films. She loves people madly, and distractedly. Jean: her long-time lover, a married minister. Mina: her assistant, her confidant, her best friend. Mina who doesn’t miss a thing. Mina who accords her everything.

Glasses of champagne at eleven o’clock in the morning. Irresistible sudden impulses. But one day, even Catherine doesn’t understand anything anymore. Everything is going too fast, everything is getting muddled. Mina will do her all to protect Catherine from the illness that shall not be named.

Because Mademoiselle wants to play her role to the end.

A little, a lot, to madness.

Pascale Lécosse lives in the region of Paris. Madly, Mademoiselle is her first novel.