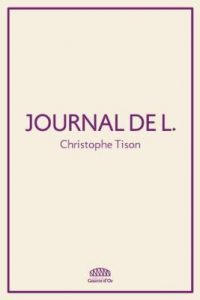 Sixty years after LOLITA, Vladimir Nabokov’s major novel with 50 million copies sold worldwide, the writer Christophe Tison gives Lolita, the main character of this subversive work, a chance to tell her version of the story.

Christophe Tison has created a literary gem from a modern classic. With a sharp writing, faithful to Nabokov’s work, he opens up the door onto Dolores’ lucid, deep, and sometimes futile thoughts.

Moved and fascinated by this young girl – he intimately understood her experience as he was also sexually abused, a story he relates in his successful book He Loved Me (2004 Grasset) – Tison wrote Lolita’s diary in order to give a voice to the notorious teenager.

From a literary monument, Christophe Tison created a masterpiece. With a sharp writing, faithful to Nabokov’s work, he opens up the door onto Dolores’ lucid, deep, and sometimes-futile thoughts.

We feel the complexity of her “relationship” with Hum, her need to flee reality, her escape plans, and her wanderings on the roads through America.

Christophe Tison is a novelist published by Gallimard and Grasset, among others. He has also written autobiographical stories such as the best-selling He Loved Me (Grasset, 2004) in which he relates the sexual abuse that he was subjected to as a child.

Excerpt from the English sample:

I perspired so much that my back is slick with sweat, I was burning up in the car. We drove all day heading west until the sun turned into a big ball of fire on the horizon.
A bloody orifice, said Hum, bloody and disgusting. Then he gave me a whole lecture on attraction-repulsion, the planets and atoms rotating around each other, he also talked about people who attract and repulse each other… you are my little blonde sun, chalky-white in the hidden crannies, he said.
It’s true that I’m quite tan, except for my breasts and buttocks.