Lights Out, Here Come the Tears 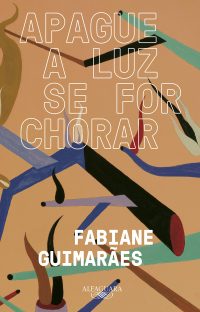 Lights Out, Here Come the Tears

Following basic rules for writing a thriller, Fabiane Guimarães pushes us down unexpected paths, throwing us off the scent here and there until the surprising conclusion. — O Globo Newspaper

This Brazilian author has a few hot topics on her radar: family, hypocrisy, and the elderly. — O Globo Newspaper

Fabiane shines in her debut novel and shows us that she is comfortable with tough subjects, which might be addressed in more depth in her future books. — O Globo Newspaper

Amid our bitter quarantine days, coming across a book like this can truly lift our spirits. This is a new voice hailing from a different Brazilian region than the mainstream Rio-São Paulo center, and it’s a good idea to keep a close eye on what she does next. Even though her debut novel has been labeled as a thriller, I suspect it’s much more than that―maybe it’s the medium Fabiane Guimarães decided to resort to in order to explore something so relevant nowadays: affection. — Época Magazine

Lights Out, Here Come The Tears introduces readers to two characters who personify the dichotomy of life and death. — Correio Braziliense Newspaper

Lights Out, Here Come The Tears is a thriller that depicts two intertwined family plots. It is a pleasant debut novel by Brazilian author Fabiane Guimarães. — Istoé Magazine

Cecília doesn’t know what to do with her own life. After moving from Brasília to Rio de Janeiro, she can’t find a job or prepare for the future. João, a single father of a boy with cerebral palsy, tries to earn his life in Brasilia as best he can. He works as a vet during the day and tries odd jobs at night — the main goal is to earn enough money to afford an experimental treatment for his son. When the parents of Cecilia suddenly die, she is forced to go back to her small town, where they still lived. However, a doubt begins to torment her: the possibility of murder. At the same time, João, who is desperate for cash, starts accepting some very suspicious jobs.

While intersecting two narratives, Fabiane Guimarães portraits the countryside of Brazil and creates a shocking thriller about the many meanings of family and the boundaries we are willing to cross to protect it.