The Time It Takes for a Match to Burn Out 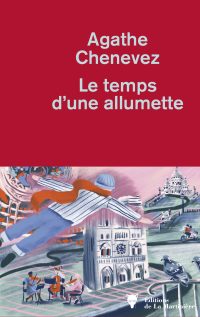 The Time It Takes for a Match to Burn Out

” When you close this book, you need silence. First, you want to internalize it, and then share it. “- Librairie Une page de la vie, Viroflay

An insightful and poetical debut novel, in a similar vein to Eric-Emmanuel Schmitt’s Oscar and the Lady in Pink and Saint-Exupéry’s The Little Prince. Tender yet serious, it is a modern fable written through the incredibly mature eyes of an author who is just 20 years old.

Gabriel is a little boy who can’t wait to learn about the world around him. His naïve yet profound child’s eyes turn life’s “little nothings” into tangible pleasures: giving your after-school snack to a homeless woman, singing in the street along with someone playing a public piano… Ever since his wheat-gold hair fell out, Gabriel has worn a blue ski cap on his head. Gabriel is seriously ill; he overheard his parents pronounce that irrevocable word: cancer.
Despite his youth, “Wheat stalk,” as his friend Fred, the painter, calls him, shows rare maturity and wisdom. His parents, friends, and doctors are at a loss? He is the child who will help the adults grow up.

In a simple but poetic style, Agathe Chenevez tells the tale of a 21st-century “Little Prince” whose life resonates with the city of Paris’s history. As Notre Dame is burning, young Gabriel slips away, carried off by his disease. But his blue ski cap remains behind, as does his love of life, no matter how short, which he passed on to everyone he met.