Latest News of the Lie 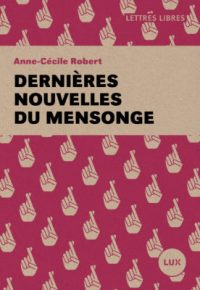 Latest News of the Lie

Lying is not a new political weapon, but it does occupy a new space in our societies and especially in the discourse of those who hold power. The real problem is not “You can’t say anything anymore!” but rather, “How have we gotten to the point where anything can be said?”

Lies have always existed in public discourse, but now these lies occupy a new space, particularly owing to social media and the confusion that arises between truth and untruth. The instrument takes ever-greater precedence over facts and matter. We talk of controlling the Internet at the risk of curbing everyone’s freedoms, and in this manner we circumvent the political issue of the conflict between truth and lie, the roots of which run deeper.

The ruling class seeks to maintain power at any cost and does not hesitate to encourage the spread of fake news, permitting the lie to thus take up a quasi-institutional position in public life. This is the final stage of storytelling. The concept of truth becomes ancillary; from here on in, he who lies best wins. This distortion of debate transforms the voter into an ever-greater spectator and ends up imposing unquestionable, even official, types of truths.

In order to rebuild the democratic public space, it is necessary to reaffirm the position of the human individual as a being able to exercise his or her faculty of reason.

Having previously denounced the spread of the tyranny of emotion, Anne-Cécile Robert now warns us against the extent of the regime of lies. As it has been observed over the course of 2020, the leaders of our societies lie unscrupulously. What allows them to do so?