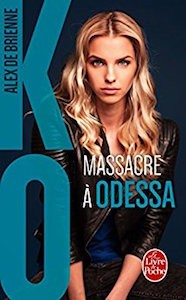 A mix of Alias and James Bond, Largo Winch, and Lara Croft

Who wanted to kill Viktor and his pro-Russian comrades on May 2, 2014 at the Trade Unions House in Odessa? Ukrainian ultra-nationalists, Kiev, Moscow, the FSB or the CIA? What game are the oligarchs playing on both sides?

An explosive conflict sets the Ukrainian army against the separatists in Donbass. Kali Grant and her brother Odys investigate the dramatic events that could plunge Europe to the edge of a third world war.

A tragic New Year’s Day in Cologne. Hundreds of Germans are assaulted. By whom? And why do the media seem to want to remain silent? A wealthy Iranian woman, whose daughter is among the victims, charges Kali Grant and her twin brother, Odys, with discovering the truth. The investigation crosses a Europe threatened and torn apart by the extreme right. Following the trail of the refugees, Kali will go as far as Mosul. In this city, fallen to the hands of Daesh, a young Yazidi is about to experience a tragic fate. To free her, Kali is mounting an extremely perilous commando operation…

The body of an explorer, horribly mutilated, is delivered to jackals on the Coast of the Skeletons. Who wanted to prevent him from sending his report? The Chinese and American multinational companies who are fighting to exploit the region? Or those crazy environmental survivalists, ready to do anything to keep a white and intact land? In a 4×4 quad, Kali Grant and her brother, Odys, embark on a true safari-investigation all over Namibia, red dunes of Sossusvlei, passing by the Kalahari and the animal park of Etosha, and sinking into the shifting sands of a merciless economic war to control nature and its rare earth.

A child sacrificed during a ritualized crime.
A Camorra boss found dead in his bunker.
A war of succession declared.
In order to protect their client, Kali and Odys will defy the octopus at the foot of Vesuvius, plunge into the volcanic depths of Naples, its traffic and its tunnels, the just and the crooked, and track down a new form of money laundering through the el dorado of bitcoin.

A woman is live on Facebook. She has fled from her family who have ruled over a small country in the Persian Gulf for years. Masked men break into her room, gag her and cut off all communication. Kali and Odys step in to try and find her, re-tracing her steps from Oriental Palaces to where she was last seen, in Bali.

Alex de Brienne is a pseudonym. Due to his profession, he is able to gain the trust of those in positions of power as well as those in the underground. He explores theatres of war and tension. He has a presence in the corridors of both NGOs and ministries. He wishes to remain anonymous in order to write freely and in complete privacy about the major events of our world.

Istanbul: Jamal Khashoggi, columnist for the Washington Post, never left the Saudi consulate. Rumor has it that the kingdom’s “mad prince” had him dismembered. Assigned to negotiate the return of a British jihad fighter, first Kali, then Odys are ordered to assist the MI6. Their mission? Finding out what the Turks and Saudis really intend to do.