Joseph Kabris. All That Life Can Bring 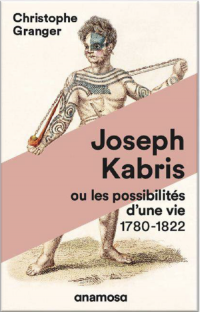 Joseph Kabris. All That Life Can Bring

In 1804 on a tiny island in the Pacific Ocean, a group of Russian explorers happened upon a white man covered head to foot in tattoos. Joseph Kabris had been living on Nuku Hiva for seven years. He became one of the natives, learned their ways of life and their language. Once discovered, he became Russian and met the Czar before coming to France, but he never stopped being “wild”. This book about his epic life is not a biography but a fascinating and troubling investigation of what makes up a lifetime.

Joseph Kabris’ life could have been an inspiration for Dumas, Stevenson or Defoe. Born in Bordeaux around 1780, he boarded an English whaler and spent seven years living on Nuku Hiva, one of the Marquesas Islands in the Pacific. In 1804, a group of Russian explorers came and ripped him from his island, his wife and his children. Once back in France, he learned French again and was able to talk about his epic life. He spent time as a marine, a warlord, a swim instructor, a carny… His life was as vast as the entire planet until his death at age 42. He never got to return to his island.

Digging into his life experience is not just writing a life from the ground up, it is writing the history of globalization that gave birth to the world we live in today. Walking down the path of this lifetime, exploring it like a quarry in which Kabris entered, turned, insisted, abandoned and underwent a transformation allows us to upturn the easy track history often takes by using faceless individuals whose lives we know nothing about to tell its stories.

By understanding how Joseph Kabris became who he was, we can produce knowledge about the past and about how history crosses someone’s life and makes it possible.