In Her Own Image 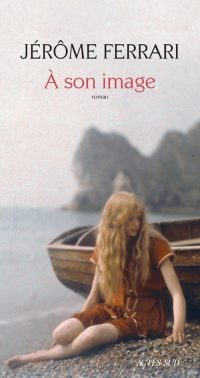 In Her Own Image

One warm evening in June, the 38-year-old Antonia takes a walk around the port of Calvi. The professionally frustrated photographer bumps into a group of legionnaires and immediately recognises one of them as Dragan, whom she had met during the war in the former Yugoslavia. They spend virtually the whole night catching up after this unexpected reunion, and then the young woman drives off to her home in the south of the island. But en route she loses control of her vehicle and it plunges over a precipice, killing her instantly.

Wide in scope but precise in detail, restrained yet deeply moving, À son image pays tribute to Antonia’s life through the eyes of her uncle, who was also her godfather and her most loyal ally throughout a life marked by struggles and doubt, great fervour and abandoned ambitions.

Out of her personal transgression and her painful failure to contend with the power and the contradictions of any form of representation, Jérôme Ferrari, creates a soundtrack blending the sounds of the requiem with the din of gunfire and the clicking of the camera shutter in this majestic exploration of the ambiguous relationship between the image, photography, reality and death.

Born in Paris in 1968, Jérôme Ferrari has taught in Algeria, Corsica and Abu Dhabi (United Arab Emirates). All of his novels have been published by Actes Sud, including Le Sermon sur la chute de Rome, which won the Prix Goncourt in 2012.