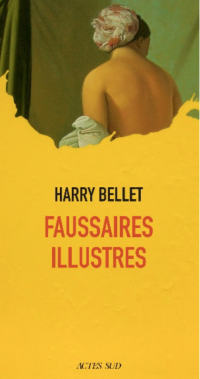 This book is well written, pleasant to read and full of interesting and revealing anecdotes. Enjoyable and educational for any art amateurs! — Gérard-Georges Lemaire, Verso Hebdo

A lively and daring story, built in an original way. — Beaux-Arts

40% of the works at the Metropolitan Museum of Art of New York are forgeries, at least according to its former director, Thomas Hoving. After further investigation, it seems that this may be an underestimate.

This practice dates back to Antiquity: a century before the common era, the Greek Pasiteles used to sell statues to the Romans that he claimed were four hundred years old, but which he had in fact just sculpted…

In his youth, Michelanglelo was not averse to engaging in similarly dubious practices. Dubious, but at the same time admirable: the failed artist but ‘genius’ forger who manages to fool academics and connoisseurs is hailed as a hero in the vein of Arsène Lupin. Indeed, the gentleman thief owned the actual Tiara of Saitferne, a gold crown purportedly belonging to a possibly mythical Scythian king which turned out to have been manufactured at the end of the 19th century by a goldsmith from Odessa and which made fools of the curators at the Louvre who had acquired it.

The story is akin to the fake Vermeers created by Han Van Meegeren, who was prosecuted after the Second World War for selling a masterpiece by the Dutch painter to Hermann Goring. He pleaded in his defence that he had himself forged the painting in question, and to general disbelief, he produced another one while in his prison cell…

Eight notorious scandals – the most recent being the ‘Beltracchi Affair’, in which the German forger managed to sell dozens of forgeries between 1990 and 2010 – are recounted in this delightful book. Some are comical, many are sad (America’s oldest gallery, Knoedler, closed down after fifty years in the business after falling victim to an art fraud), and there is the occasional tragedy: the killers of the British forger Eric Hebborn, who was murdered by a hammer blow in 1996 in a seedy street in Rome, have never been found.

Out of these stories, two truths emerge: no, there is no such thing as a ‘genius’ forger (except for those who have never been caught), and yes, fakes are everywhere, and they are very difficult to detect.