I Am Writing to You From Auschwitz. The Recovered Letters 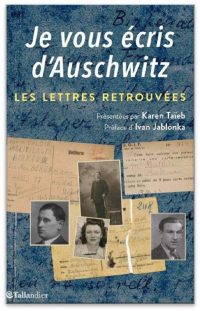 I Am Writing to You From Auschwitz. The Recovered Letters

Between 1942 and 1944, the Nazis set up a propaganda operation, called Brief-Aktion, intended to reassure the Jews of France about the fate of their loved ones. These are their stories.

Of all the countless documents which can help us to write the history of the Holocaust, letters occupy a special place. Whether they be letters written by Jews interned in the camps or prisons of France, postcards announcing their departure to an ‘unknown destination’ or messages written in haste on a scrap of paper and thrown from the deportation convoys, every letter is important, because each reveals something of the life of an individual, rather than merely the name of another victim to be added to the Wall of Names in the Marais in Paris. They are direct links to the person who held the pencil which wrote the words. Not all of the letters are of interest in terms of their content per se, but they are often the only remaining trace of a deportee.

Whatever their type, letters written by Jews interned in Auschwitz which got through to their destination are few and far between and have not been brought properly to public attention.

Drawing on a selection of original specimens from the collections of the Mémorial de la shoah (the holocaust museum in Paris), the aim of this book is to bring to a wider audience these extraordinary documents, which enable us to retrace the lives of people after they disappeared into the oblivion of deportation.