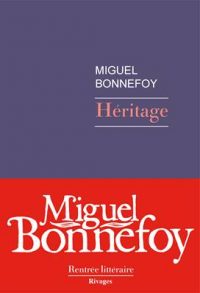 Legacy is a very original and moving book. The writing is so intimate and gripping and the story as incredible as it sounds, keeps its human connection at all times. Tradition, and family hopes and dreams, are passed on and to boot. It is very unusual to have a story of French emigrants to Chile. I can’t wait to read Bonnefoy’s next book! — Judith Gurewich, publisher at Other Press

In this bold and gripping saga, Miguel Bonnefoy intertwines his colorful characters’ fates with those of their homelands, from Europe to the Americas. Mapuche traditions become laced with a legacy that is specific to the uprooted and a visceral attachment to a land that is at times welcoming, and at others, deadly, and whose sap is the blood of its inhabitants. — Lire Magazine littéraire

(…) his fiction binds the epiphanies of the Lonsonier family to the tragedies of history in order to express the doubts and fortunes of exile, the weight of blood and the irony of death. — Les Inrockuptibles

This 33-year-old Franco-Venezuelan writer whose story-telling talent is consistently impressive is a veritable prodigy! (…) Héritage is already turning into one of the highlights of the fall season. — L’Express

You’ll be elated to let yourself get carried away by this bountiful world, flickering between witchcraft and the characters’ roots in France’s Jura mountains; the delightful diversity engendered by exile; Bonnefoy’s flamboyant style and its magnificent filiation with Latin American literature, the hints of Jorge Amado or Horacio Quiroga. (…) If he keeps approaching the most prestigious prizes (…) he deserves to wind up taking home one of the Big Five (Goncourt, Femina, Médicis, Renaudot or Interallié). — Sud-Ouest

The house on Calle Santo Domingo in Santiago de Chili, screened from view by three lush lemon trees, has sheltered three generations of the Lonsonier family. Having arrived from the harsh hills of France’s Jura region with a single grape vine in one pocket and a handful of change in the other, the patriarch took root there in the late 19th century. His son, Lazare, back from WWI’s hellish trenches, would live there with his wife, Thérèse, and build the most beautiful aviary in the Andes in their garden.

That’s where their daughter Margot, a pioneering aviatrix, would first dream of flying, and where she would pair off with a strange soldier reappearing from the past to give birth to the revolutionary Ilario Da. Many years later, a cruel tragedy would strike the Lonsoniers. Caught in the eye of the storm, they will fly off to meet their fate together, carrying the mysterious legend of a vanished uncle as their sole legacy.

In this dazzling saga that unfolds on both sides of the Atlantic, Miguel Bonnefoy paints the portrait of several generations of an endearing, uprooted family whose terrible dilemmas, caused by the blows of history, reveal their deep humanity.