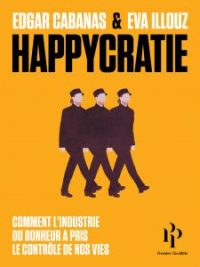 “Eva Illouz and Edgar Cabanas attack the dictatorship of happiness with brio. This is an edifying, urgent and important book that helps us understand the influence of a now global ideology that serves the power.” — Marie Lemonnier, L’Obs

“An accurate criticism of the tyranny of a model of artificial happiness, stripped of all social context.” — Jean-Marie Durand, Les Inrocks

“We cultivate it, we theorize it, and we make it a business, writing books and giving classes on it. It is the new fuel of productivity. In society and at work, happiness has become the new order.” — Nicolas Santolaria, Le Monde

“Isn’t the science of happiness the prelude to an ultra-individualistic society? The doctor in psychology Edgar Cabanas and the sociologist Eva Illouz explore these essential questions.” — We Demain

An urgent, accessible and provocative book on what has become a universal quest: happiness and the ways to get there.

We live in a world that is awash in with happiness. To a point where being happy seems to have become not only a life goal for many of us but a right and an obligation, another facet of the American dream– indeed, who would claim that he wants to be and stay unhappy? To help us reach this desirable goal, a new science has emerged at the end of the 90’s: positive psychology with its doctors, its self-proclaimed scientists and its gurus who are here to teach you how to be happy. With their kind but firm help you will learn how to beat back negative and non-productive feelings and grow joy and positivity instead. And if you fail… but you cannot fail. You are not allowed to fail, you are condemned to success in your own good. And if you do, it will be your entire fault and responsibility, for lack of will and work, not the society’s fault.

But don’t forget that happiness is a warm gun, yes it is… Here, renowned sociologist Eva Illouz, the author of several groundbreaking books on love and the way it has become a commodity, and Edgar Cabanas brilliantly show us what hides behind the tautological curtains of this happycracy. What is at work and at stake politically, ideologically, scientifically and economically, and how this movement can be analyzed from a sociological point of view. The authors demonstrate with vigor and insight how this way of thinking has shifted the responsibility from the society to the individual in only a few years. And the consequences of this movement are both fascinating and frightening.

Edgar Cabanas received his PhD in psychology from the Universidad Automna de Madrid. He is now associate professor at Camilo José Cela Universidad in Madrid as well as adjunct Researcher at the Center for the History of Emotions at the Max Planck Institut in Berlin. His work looks more specifically at the political, economical and social uses of happiness. Happycracy is his first book.

Eva Illouz received her PhD from the Annenberg School for Communication at the University of Pennsylvania in Philadelphia. She has served as a visiting professor at NorthWestern then Princeton University. She teaches sociology at the Hebrew university in Jerusalem and in 2008 she was made a member of the Wissenschaftskolleg in Berlin. In 2009, the German newspaper Die Zeit called her one of the 12 thinkers most likely to “change the thought of tomorrow”. In 2012 she was appointed as first female President of Bezalel Academy of Art and Design from which she resigned in 2014. Illouz is also a professor at Paris’ School for Advanced Studies for Social Sciences (EHESS). In the tradition of the Frankfurt School, her work revolves around a critic of “emotional capitalism” or the ways capitalism transforms emotional patterns in products and consumption goods. She is the author of 8 books that have been translated in 15 languages among which Cold Intimacy: The making of Emotional Capitalism, and more recently Why Love Hurts and Emotions as Commodities.