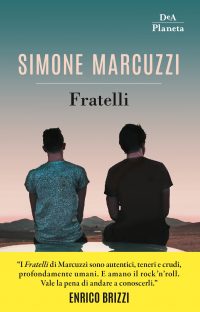 Marcuzzi’s Brothers are profoundly human: gritty, compassionate and real. And they love rock and roll. You should meet them – Enrico Brizzi

Having a brother can be the best thing in the world. Learning how to be brothers can be the hardest.

Lorenzo and Alberto are brothers, separated by two years and opposite personalities. Alberto, the youngest, is a shy, thoughtful boy. He gets high grades at school and is naturally inclined to respect the rules: the kind of child who never causes a problem. Lorenzo, the older one, is a born leader, determined to follow his own path wherever it might lead, and always destined to be a surprise.

They live with their parents and share the same friends in a small village in Friuli. The comforting and slightly claustrophobic atmosphere of Italy’s hardworking, tight-lipped north east is beautifully captured by Marcuzzi.

Alberto earned himself the nickname of “Anchor” because he is always at his brother’s side, making some misguided attempt to prove he’s in the same league. Yet he doesn’t mind being a weight on his brother, because it means they’re linked together. Inseparable forever. And he would follow Lorenzo to the ends of the Earth just to learn how he moves when he plays the guitar, just to listen to his music, just to be like him, just a little bit. The problem is that then they grow up.

Their adolescence is stormy and disrupts everything, and adult life will prove, year after year, to be an indecipherable puzzle. When Lorenzo leaves the family to study in Bologna, their strong bond begins to fray. Moments of complicity are replaced by silences and the two men watch their worlds change and stop feeling so similar. How can we explain that sometimes we lose people who share our own blood? How do we handle the fears we’ve been carrying inside us since childhood, without the unconditional support of the person who shares them?

Simone Marcuzzi makes a sweetly intense exploration of the unique relationship between people that can be everything to each other – accomplices, confidants, thorns in the side, strangers: in a word, brothers. This is a story of unspoken words, powerful hugs, heated rivalries, a mixture of complicity, jealousy, competition, and most of all, love.

Brotherhood is a special bond, that has never been explored like this.