And in the Jungle, God Was Dancing 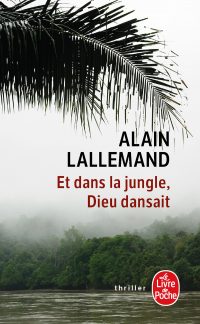 And in the Jungle, God Was Dancing

This book, with its inspired style, is like a love song for Colombia that explores our need to rebel. – La Libre Belgique

And in the Jungle, God was Dancing, a powerful and well-written novel, thus tells the tale of a slow waltz between love and revolt in the tropical rain-forest. With this decisive question which we murmur as though free-diving: and if they were the same thing? – Isabelle Falconnier, L’Hebdo de Lausanne

A withdrawn story which gives pride of place to adventure, to poetic descriptions of a grandiose nature with which its characters have as much a carnal as a spiritual relationship, to humanity at last, as ultimate resistance against the clatter of the world. – Frédéric Loore, Paris-Match

It blows an invigorating and stimulating wind, and which gives love all its revolutionary force, while offering a great meeting with nature, this jungle which allows you to rediscover the meaning of life, of all life. – Eric Brucher, Radio Antipode

And in the Jungle, God Was Dancing explores the tropical rainforest while choreographing a slow waltz of love and rebellion. A powerfully intense novel.

A novel that recounts the fates of two rebellious souls, Théo and Angela. Between them, they’ve lived all of a half a century, but they’ve already understood that tweeting and getting indignant won’t change the world. You’ve got to hit it hard. Fascinated by the last of the region’s guerilla fighters, they head for Colombia’s tropical rainforest and join the FARC. But violence is always disappointing.

Extract from the novel:

“Going back down into town, they revealed themselves a little, discovered a common age – twenty-six – and a shared rage for the century, money talks, easy indignation on social media. She took him to the back of a bistro. This evening of January 6th 2014, the administrative police registers indicate that two “targets”, two suspects have found themselves in the back room of Cafe Caminando, neighbourhood of the Canfelaria.”