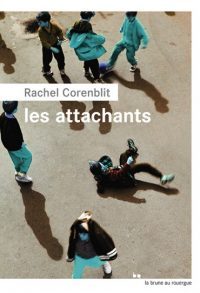 “The strength of this novel emanates from its authentic and sensitive tone, from the correctness of the feelings, from the appeal of the characters whose future we want to know, and from the teacher’s doubts about the legitimacy of teaching such as it is practiced today.” — Page de libraires

“What can we express, Madame Corenblit, if not our admiration, our solidarity, even our affection, whether we read your work as a relative, a colleague, or simply a citizen? What a magnificent political writing is your work, which you claim as such very justly: can one live in this society, what’s the position of the school in it, and what use does it have?” — La cause littéraire

This book is as exciting as it is disturbing, referring to the responsibilities of a society that hides itself like an ostrich instead of thinking about solutions for these children… It is all the more touching that the author has never ceased to lead this struggle – with children, as an educator, or as an author.  — Le Populaire du Centre

Acacias primary school is very much at the bottom of anyone’s wish list and yet this is where Emma is about to be appointed as a teacher. Her class of ten-year-olds breaks all the records for the sheer concentration of underprivileged kids per square metre. From September to June, we follow the daily routine of this young and committed teacher, complete with character sketches of her kids: the endearing ones. Then there are the encounters with the parents, who are often a bit lost themselves, sometimes touching, and sometimes indignant. It turns out to be a decisive year which converges towards a terrible episode which almost prompts Emma to give up the profession. Rachel Corenblit drew on her own experiences in writing this novel about the social deprivation in which certain French schools are mired. It is a political book in the best sense of the term: how far have we got with equality of opportunity in our schools?

Rachel Corenblit lives in Toulouse. She taught in primary schools and then became a teacher trainer. Today she is a primary school French teacher. She has written several novels for children and young adults, published by Le Rouergue and Actes Sud Junior, as well as her first novel for the “La brune” collection, Quarante tentatives pour trouver l’homme de sa vie (2015).