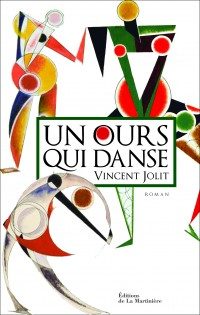 Arriving at literature by way of music, Vincent Jolit has written a choreographic story that makes you think about the body, both public and private. – Livres Hebdo

“And above all my body as well as my soul,
keep yourselves from crossing your arms, in the sterile stance of the spectator,
because life is not a show,
because a screaming man is not a dancing bear”

Aimé Césaire, Notebook of a Return to the Homeland

In Saint Petersburg, in the 1900s, Fyodor has wanted to dance ever since he saw a dancing-bear show as a child. But everyone tries to stop him, and he has to fight for what he wants. Then come the Ballets Russes, and he believes he has won his struggle and will be able to dance for the rest of his life.

In New York in the 1960s, Franz dances. He left Germany to dance. He dances to escape his parents and a family past he despises. After hesitating a bit about the form – post-modern dance or not -, he thinks that getting into choreography will enable him to bury his ghosts for good.

In Toulon in the early 2000s, Françoise has recently been widowed. It may be the only way for her to set aside a life to which she was subjected rather than actually lived. Someone suggests dancing as a way of taking her mind off things, but with her bad foot, it won’t be easy. In fact, it’s almost out of the question. And yet…

Three voices. Three bodies that overcome the obstacles confronting them and manage to free themselves through modern dance. That freedom is also the story of contemporary dance itself, a story that is told between the lines of this tale.

The chapters in this literary triptych alternate between each of the three main characters – each of whom has been wounded in both body and soul. With the force of a grand saga, it draws readers from Fyodor’s pirouettes to Franz’s poses, and from there to Françoise’s hesitant steps. Vincent Jolit shows how we can escape our fates by throwing our bodies into the battle, how you can really be yourself by cutting the ties that bind, and how you can stop being a spectator by becoming a dancer.

Praise for his previous novels:

For his first novel, Clichy:

Vincent Jolit offers a powerful presentation of what keeps women from demanding their fair share or their rights -Â Lire, 13 September 2013

About his second novel, Harmonie, harmonie:Â

An admirable novel that confirms the emergence of a precise and welcoming writer (…) a bio-fiction that’s both dense and well-documented, yet written in a style that makes it enjoyable to read. A confirmation. –Le choix des libraires.com

Harmonie, harmonie confirms both Vincent Jolit’s talent and his progress. As an encore to his first novel, Clichy (…), he has written a novel with a wider scope, one that allows him to deepen his reflections on the creative process. – L’Avant-scène Opéra