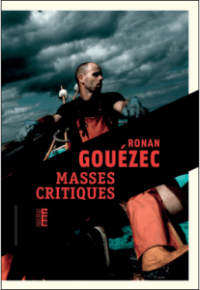 That night the Bannecks – the father and his two sons – took a boat out for a spot of illegal fishing, as was their wont. The father was at the helm and his sons were diving for shellfish. But old Banneck had drunk too much and the boat never made it back to port.

René Joffre, the restaurant owner whose elegant establishment dominates the natural harbour, assumes that this will mean an end to the endless extortion and blackmail that the three Bannecks, and especially the old man, had been subjecting him to for months. And that he can finally get on with his life in peace and quiet with his wife Yvette and his childhood friend and alter ego Marc whom he has always been able to count on. But that is to reckon without Marc compromising their friendship and the Bannecks returning from the deep, more dangerous than ever.

Born in Finistère in 1964, Ronan Gouézec is a literary and coastal wanderer. His first novel, Rade amère, was published in 2018 and has been shortlisted for the Prix Cézam, to be awarded in November 2019.