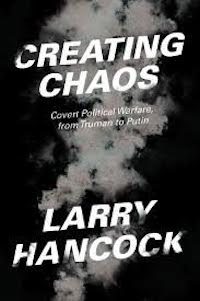 Creating Chaos explores that dark side of statecraft, the covert use of political warfare in international relations – from its early practices during the Great Game between the British and Russian empires, through the Cold War era of ideological confrontation and forward into the hybrid political warfare of the 21st Century.

There’s an ongoing war involving most of the developed world. Its munitions are pixels instead of bullets, hacks instead of bombs—and it encompasses anyone who uses a cell phone or computer.

Surreptitious Russian involvement in elections in the U.S., the Ukraine, and elsewhere and many more such recent scandals are examples of the dark side of statecraft explored in Creating Chaos. The covert use of political warfare has a distinguished lineage, with roots in the “Great Game” between British and Russian empires. It continued to develop through the Cold War era, and has now blossomed into the hybrid political warfare of the 21st Century.

Using the most current information available, Larry Hancock, a “veteran national security journalist” (Publishers Weekly) introduces the nature and history of such practices, examining a number of formerly secret American and Russian hybrid warfare and “active” measures. Ranging across the globe, from Guatemala, Iran, and Indonesia to the U.S. and Russia, Hancock’s book details the exponential increase in covert warfare—and the equally exponential risk and consequences involved.

Larry Hancock brings formal training in history and cultural anthropology to his research and writing on Cold War history and national security subjects. Following service in the U.S. Air Force, his career in computer/communications and technology marketing allowed him to become consult on strategic analysis and planning studies. With seven books in print, Hancock’s most recent works include an exploration of long term patterns in covert action and deniable warfare (Shadow Warfare), the effectiveness of national command authority and command and control practices (Surprise Attack) and (together with Stuart Wexler) the assassination of Martin Luther King, Jr. (The Awful Grace of God: Religious Terrorism, White Supremacy, and the Unsolved Murder of Martin Luther King, Jr.).

Surprise Attack: from Pearl Harbor to 9/11

“A valuable examination of U.S. national security crises past and present.” —Kirkus Reviews
“Clear and detailed . . . An important topic for everyone to comprehend, as the threat of a new attack is constant, both from home-grown extremists as well as foreign groups.” —Library Journal (starred review)