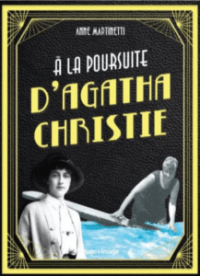 Agatha Christie spent her entire life travelling the world and her work shows a clairvoyant and ever-unique view of the 20th century.

She learned to swim in Dinard when she was four, found the Pyrénées “flat”, and was the first Englishwoman to surf the waves in South Africa. She amused herself by tasting fast foods in New York, became the most-read female writer in the world, and never said no to an adventure or a dangerous trip. She never ceased travelling: whether in the Middle-East by 4×4, on a bike in London or a train in Scotland, in a boat to Majorca or in her darling car, a Morris Crowley.

She observed the world with a kind but realistic eye, noting the qualities and faults of her pairs… who would later make an appearance in her detective novels, either as a victim or… the murderer himself!

These are the stories that Anne Martinetti tells us thanks to original documents. With this travel log, she invites us to follow in the footsteps of an intrepid and tireless globe-trotter.