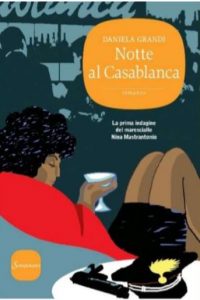 THE FIRST NOVEL OF A SERIES WITH CARABINIERI MARSHAL NINA MASTRANTONIO

Nina Mastrantonio, Marshal of the Carabinieri in Parma, must work twice as hard to get paid: she is a woman, she is beautiful, and she has black skin. Moreover, it has an independent character, is singly single and, with disapproval of the colleagues, she prefers sex without ties to a stable relationship. On the other hand, it is the affections that are the sensitive point of this young woman in search of identity: an Italian of Somali origin, she is proud of her traditions, but at the same time she is determined to establish herself in the country where she was born , Italy, where her grandfather – recruited by the carabinieri at the time of colonialism – emigrated at the end of the Second World War.

A rainy Monday, in the apartment of an anonymous building is found the corpse of Marco Cagli, a pleasant aviation pilot. The victim lies naked on the bed, with a plastic bag around his head. There are those who would like to dismiss the case as an evil-born auto-erotic game, but Nina has another warning: she knew the man well, including her sexual habits. Supported by the faithful Paolini and by the charming sergeant Navarra defying the convictions of the superiors, Nina decided to start an investigation for suspected murder. Especially since someone has started sending them anonymous notes with strange literary quotations: they are trying to tell you something, but what? And why does a young prostitute try to get in touch with her? And how do we explain so much silence and embarrassment among the notables of the city? Many tracks lead to Casablanca, a club for swingers frequented by respectable people in the province. Between games of power, sex and blackmail, Nina will have to scrape away the glaze of appearances and immerse herself, alone against everyone, in an investigation full of shots of the scene, to come to the head of a disturbing and delicate case.

THE NEW INVESTIGATION OF MARSHAL OF THE CARABINIERI NINA MASTRANTONIO

A fire ravages the top floor of a building in the center of Parma, in the market area. The marshal Nina Mastroantonio rushes: there is a dead man, owner of a small fabric shop. It soon becomes clear that it’s not an accident, and the chief of Nina – the vain Cattaneo – announces to have already identified and arrested the responsible, a young boy from Ghana who works as a prostitute and that was dating the victim: the perfect offender. Nina is not able to run this investigation and in fact is distracted from her worries. Why doesn’t her colleague Navarra come back from his Sicily? Has he maybe found another woman? Nothing makes Nina fuming as much as finding out to be jealous. Her second concern regards instead Volkov the man who had almost killed her and that seems now to be back in the Emilia region for getting his revenge. But one day, the mum of the Ghanaian boy accused of the murder shows up at the police station and manages to convince Nina to reopen the case. It will be for her, together with her inseparable colleagues, unravel little by little the thread that from the murder of the market leads to a rich family of the city, to an elegant villa and to an ancient secret remained hidden for fifty years.