CAR-WASH: Judge Sergio Moro and the Behind-The-Scenes Story of the Operation That Shook Brazil

CAR-WASH: Judge Sergio Moro and the Behind-The-Scenes Story of the Operation That Shook Brazil

“Written in the style of police thrillers, this reporting-book, produced over 17 months, gives the public the opportunity to understand the genesis, the behind-the-scenes story, and the main players in the greatest operation against corruption that has ever been seen in this country.” – Globo

“A gripping narrative of power and corruption, and the inspiration behind the major Netflix series, it tells the story of how a team of policemen and lawyers unearthed an apparently small-time money-laundering scam which ultimately led to the heart of big business and government in Brazil. Vladimir Netto’s clear-sighted reportage on this extraordinary story is completely absorbing, and as soon as we read the material, we knew we had to offer on the book.” — Andrew Goodfellow & Clare Bullock, Penguin Random House-UK

Brazil is going through a frantic succession of discoveries about corruption and politics that surpasses any fictional series on TV. CAR-WASH: THE JUDGER SÉRGIO MORO AND THE BEHIND-THE-SCENES STORY OF THE OPERATION THAT SHOOK BRAZIL shows the reader how it all started and all the unexpected events that came next. The book covers the beginning of the operation, when a dealer was being investigated at a gas station that served as money laundry, up to the arrest of some of the biggest Brazilian businessmen and most powerful politicians. With an easy-reading-thriller style and rich in details, the book will pull the reader into the hurricane that is changing Brazilian politics.

Since it was published in June 2016, the book has been on bestsellers non-fiction lists. For 15 weeks, it remained as number l. In February 2017, it had been among the top 10 bestsellers in Brazil for 33 weeks. Hundreds of thousand copies have been sold all over the country. Audiovisual rights went to moviemaker José Padilha (producer of Narcos), who is preparing a TV series for Netflix telling the Car-Wash story. The series, with a release date planned for the beginning of 2018, will be aired all over the world introducing international viewers to real and larger-than-life hero Sérgio Moro. 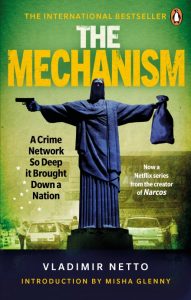