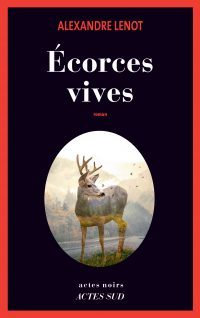 The plot of history is sober, the language beautiful, in this black, rural novel. This debut French novel presents a dough nature writing, ethereal and dreamlike, mixing both fable’s and undergrowth’s perfume, to narrate, without fanfare, the dark destiny of these characters chained to the mountains. — Julie Malaure, Le Point

Maupassant’s voice is within earshot of this new pen, which publishes its debut novel in the same vein as rural crime. This story of the torn character’s return to a hostile land is a beautiful promise of darkness. — Élise Lépine, Livres Hebdo

It is a region of mountains and forests that the main roads seem to avoid. Former city dwellers – outsiders who have chosen to come and stay – love this rugged and beautiful landscape, but they are not welcome. Anyone not born here is an intruder; anyone who respects nature for what it is, without seeking to possess or subjugate it, is considered a threat. Éli is one of these undesirables. He has just burnt down a farm and disappeared into the woods, as if to deaden an unspeakable sorrow. He roams in the forest and the attitude of the locals veers from wariness to outright hostility, with the exception of a newly arrived young woman who takes him in. Together they set out to reawaken the land and return it to its original wild state, which insinuates itself into their beings and liberates them. A thriller, a social fable and a rural western, Écorces vives is an ardent homage to melancholic and untameable souls.

Alexandre Lenot was born in 1976. He lives in Paris and also writes for the cinema, radio and television. Écorces vives is his first novel.