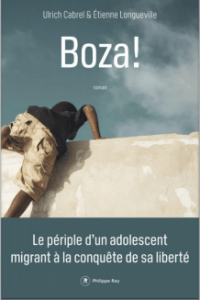 “This is a beautiful novel, a beautiful story… Above all, it’s an entirely true story. Sometimes, several different life stories have been mixed together to make it more palatable, more exciting or better-paced, perhaps. But it’s all true, all of it. Straight talk, eloquence, fire in the belly.” — Yann André, Penthièvre

An original and fascinating debut novel, which tells the colorful and humorous story of the eventful life of an 18-year-old migrant. This lively and fast-paced adventure novel is filled with moments that seem so authentic they must have actually happened. And they did. It is impossible to put down.

Born in a shantytown on the outskirts of Douala in Cameroon, Little Wat was an eccentric teenager who liked to paint the town red with his friends. Knowing he had no future there, he made the difficult decision to leave and make his dream come true: to go boza, to reach Europe.

With a torn backpack and a great deal of faith in himself, Little Wat finds himself in many dangerous situations. Abandoned by a smuggler near the Niger border, he must face the ghettos of the desert. Once in Morocco, he joins hundreds of young migrants like himself who are banding together to face the “Three-Headed Monster,” or the massive barriers separating Africa from Europe. Is it really possible to make it to the other side?

In Boza!, Ulrich Cabrel and Étienne Longueville take an entirely new look at the reality of human migration. The characters’ eloquence and humorous storytelling contrast with the hell they are experiencing. The combination makes this adventure novel utterly captivating.