The Berlin Shadow: Living with the Ghosts of the Kindertransport 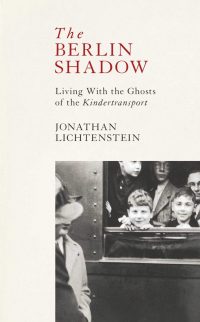 The Berlin Shadow: Living with the Ghosts of the Kindertransport

“I am delighted that we have been able to acquire US rights to Jonathan Lichtenstein’s stunning memoir. I found the book mesmerizing. Each of the three strands of the author’s story is so compelling and propulsive, and he braids them together brilliantly. I was reminded of our own A Lucky Child by Thomas Buergenthal as well as Edmund de Waal’s The Hare with Amber Eyes. It’s simply a gorgeous book.” — Tracy Behar, Vice President, Publisher, and Editor-in-Chief of Little, Brown Spark

“If you read one book this year, make it The Berlin Shadow. It is deeply moving, utterly compelling, touchingly funny and so beautifully written that at times it takes your breath away. It taught me so much about love, life, memory and time that I feel I have grown wiser and more appreciative of my own life because of it. I cannot praise this book enough. Every adjective I come up with falls short. Lichtenstein has a rare gift that I hope will be shared with readers all over the world.” — Santa Montefiore

“We were deeply moved and impressed by Jonathan Lichtenstein’s writing, by his honesty in letting us as readers participate in his family’s history, and how he gives us insight into his family’s history and his relationship with his father. This book is important both as a Holocaust memoir and as an account of the extraordinary relationship between a son and his father. How could someone left alone at such a young age provide a loving home for his kids? The book also makes a strong literary impact, and we were very impressed by the accomplished writing.” — Katharina Dittes, acquiring editor Suhrkamp Verlag

A formally audacious and deeply moving memoir in three timeframes that confronts the defining trauma of the twentieth century, and its effects on a father and son.

In 1939, Jonathan Lichtenstein’s father Hans escaped Nazi-occupied Berlin as a child refugee on the Kindertransport. Almost every member of his family died after Kristallnacht, and, arriving in England to make his way in the world alone, Hans turned his back on his German Jewish culture.

Growing up in post-war rural Wales where the conflict was never spoken of, Jonathan and his siblings were at a loss to understand their father’s relentless drive and erratic behaviour. As Hans enters old age, he and Jonathan set out to retrace his journey back to Berlin. This is a highly compelling account of a father and son’s attempt to emerge from the shadows of history.

For readers who enjoyed East West Street and The Hare with the Amber Eyes, The Berlin Shadow is a beautiful memoir whose themes – of family secrets, the trauma passed down through generations, and the relationship between adult children and parents in their twilight years – will resonate widely.

The book is also a celebration of the Kindertransport, an organised act of altruism  – although realised amidst considerable domestic opposition at the time – that saved the lives of some 10,000 refugee children. Many of these children went on to make significant contributions in their adopted homeland and beyond (including, for example, four that became Nobel Prize winners). The book therefore offers an important and timely perspective on contemporary debates about immigration.