Becoming Abolitionists. Police, Protests, and the Pursuit of Freedom 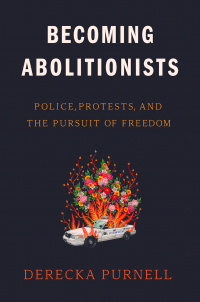 Becoming Abolitionists. Police, Protests, and the Pursuit of Freedom

With deep insight and moral clarity, Purnell shares her compelling journey of political education and personal transformation, inviting us not only to imagine a world without police, but to muster the courage to fight for the more just world we know is possible. ‘Becoming Abolitionists’ is essential reading for our times. — Michelle Alexander, bestselling author of The New Jim Crow

One of the most perceptive and passionate thinkers of any generation, Derecka Purnell, has written a genuinely revolutionary text for our times—one that resists easy answers or solutions and never shies from the hard questions. She proves that abolition is not an event or a utopian dreamstate, but rather a journey of assembly struggling to create new worlds of freedom as we fight the unfree world we inhabit. Beautifully written, passionate, honest, ‘Becoming Abolitionists’ charts a journey we all must take if we plan to survive, let alone live together. — Robin D. G. Kelley, author of Freedom Dreams: The Black Radical Imagination

Becoming Abolitionists is a vital resource for anyone committed to the struggle for social justice, written by one of the sharpest and most inspiring voices to emerge in a generation. Taking readers on a journey from her childhood in St. Louis to the protests in Ferguson, the halls of Harvard, the streets of Soweto and beyond, Derecka Purnell’s heart-rendering analysis gives us the tools to envision a new society with endless possibilities. Even more, Purnell’s extraordinary blend of personal memoir, history, and critical theory provides a roadmap to build a safer and more just world. Like the Autobiography of Angela Davis, ‘Becoming Abolitionists’ is sure to remain an essential text for decades to come. — Elizabeth Hinton, author of America on Fire and From the War on Poverty to the War on Crime

Purnell is undoubtedly one of the most important writers and activists of our generation, offering us a vivid, moving and compelling book for anyone interested in one of the most urgent issues of our times. Purnell weaves experiences of racism and resistance to articulate a blistering critique of racial capitalism, state power and imperialism, taking readers on a journey towards the radical alternatives to police and prisons which have shaped Black political movements in the 21st century. — Adam Elliott-Cooper, author of Black Resistance to British Policing

Derecka’s book provides a front row seat to how a generation of young people have been radicalized by a series of contradictions living within the heart of global empire: the United States. She explains, with powerful stories and brilliant analysis, how she has committed herself to abolition in the context of ongoing collective study and struggle. The abolition she discusses is anti-capitalist and anti-colonialist, committed to racial, economic, and gender justice. A call to not simply tear down prisons and police, but to build a society where our collective needs prevail over profit and punishment. This book is more than a front row seat, it is an invitation to join the most important movement of our time. — Amna Akbar, Professor of Law, The Ohio State University

In the wake of the murders of Breonna Taylor and George Floyd, an invitation to imagine a world without police, following activist Derecka Purnell’s journey to embrace abolition.

A long-overdue national reckoning with the problem of police violence is finally underway. From community policing initiatives to increasing calls to reform, defund or abolish the police, more and more people are grappling with what alternatives to policing might look like.

Enter Derecka Purnell, organizer, journalist, Harvard Law graduate, and a rising voice of the Trayvon Martin Generation. In making the case for police abolition, Purnell draws from her personal journey, as a child growing up in poverty, where calling 911was often the only option, as a young woman determined to seek justice from the law, and later as a lawyer and advocate for abolition.

Structured in chapters that address concerns around police abolition—what about the murderers? The rapists? How do we stay safe?—Purnell argues that police can not bereformed and invites readers to envision new systems that work to address the root causes of violence instead.

A revolutionary book about choosing freedom, Becoming Abolitionists will inspire readers to imagine and create new communities that can guarantee safety, equality, and real justice for all.