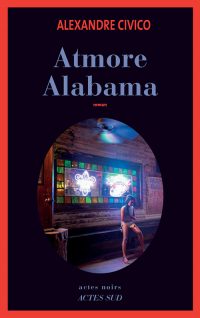 On landing in Florida, he knows exactly where he will be going in his hire car: Atmore, a far-flung little town in deepest Alabama. He is clearly ravaged by an insurmountable grief and is impervious to any emotion but pain. He settles down in his lodgings and starts getting to know the town, where he is the only person to get around on foot as opposed to by car, which would be enough in itself to mark him out as a foreigner. And gradually he begins to stray towards the prison on the edge of town…

What is this sombre and taciturn Frenchman doing in this kingdom of red necks, guns and boredom? He meets a young Mexican drifter who triggers something within him and to whom he becomes attached, perhaps because she is just as fragile and desperate as he is beneath all her bravado. Or perhaps because only she really understands what he is seeking: a sense of being uprooted, strong emotions and vengeance. Something quite different, which she could help him to find.

Born in 1971, Alexandre Civico is a member of the Inculte collective. Following on from La Terre sous les ongles (Rivages, 2015) and La Peau, l’écorce (Rivages, 2017), Atmore, Alabama is his third novel.