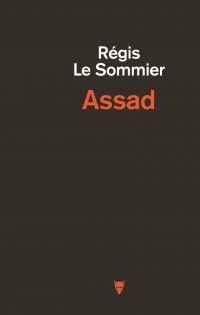 What goes on in the head of Bachar El-Assad? Régis Le Sommier is one of the few journalists to have met the Syrian president several times since the beginning of the Syrian War. – france inter

How can a journalist face up to a tyrant? Exclude him from his scope of investigation? Or approach him, try to grasp his mechanics? The question arises regularly at the whim of the dictators who parade at the head of certain states. – Paris Match

In this book, he returns to his sojourns in Syria and delivers his personal impresses on a complex and secret man. This is the story of this three-hour-long interview conducted in June 2015 and unintended for publication, in the Assad refuge, on the heights of Damascus. – Jean-Louis Tremblais, Le Figaro Magazine

The experts gave him several months at the head of Syria. Hundreds of thousands of deaths later, he is still in power. In this latest work, Assad, Régis Le Sommier, international consultant, paints a controversial portrait. – Julie Lasterade, Grazia

It is a matter of diving unknown into the heart of Syrian power, detained by Bachar El-Assad who has succeeded his father. – La Lettre de l’Audiovisuel

Régis Le Sommier is one of the few journalists to have met Bachar El-Assad on several occasions. This is his portrait of the man and the politician. A journalistic investigation with literary flair.

Régis Le Sommier was afforded the rare opportunity to enter the lion’s den of a dictator whose crimes against humanity are now plain for all to see: Bachar El-Assad. Combining personal impressions and narrative journalism, Le Sommier lifts the curtain on one of the most controversial figures of our time.

Full of insights into power in Syria, this book sheds light on the relationships between Syria, Russia, the United States and France in face of the challenges of Islamic fundamentalism.

Going after a scoop entails a certain kind of blindness. My fears proved unfounded. No recording, no tricks, no trap, and it is me reporting this encounter as I write these lines. I am doing so because there are only a few of us to have seen him in a different light, other than as a leader being interviewed. When you have this opportunity, you have to take it. It was also a matter of content. What could I get from this interview? Would I get a better understanding of him? Would I see him in a new way? I had no idea.

Régis Le Sommier is the co-editor of Paris Match and a senior reporter (Mali, Afghanistan, Iraq, Syria…). An expert on the Middle East and terrorism, his book Daech, l’histoire was published by Editions de La Martinière.