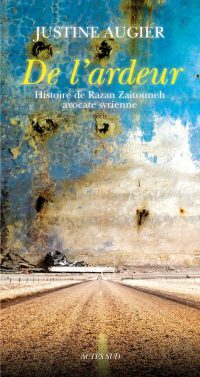 “The portrait, composed by Justine Augier from a long investigation, is at once the analysis of an atrocious political system, based on manipulation, terror, and opacity.” — Claire Devarrieux, Libération

“Between Asli Erdogan and Emmanuel Carrère, an important, fair, and courageous book.” — The Inrockuptibles

“The fascinating portrait of a Syrian lawyer, Razan Zaitouneh, kidnapped more than three years ago for investigating the human rights violations in her country. Justine Auger delivers a captivating portrait of a woman in “freefall” while avoiding the pitfall of emphatic commiseration.” — William Irigoyen, Lire

In this exciting book that is as much a detailed document as it is a literary piece, Jean Moulin is a young Arabic woman, addicted to work and coffee, with a Facebook page. […] No mushiness or sentimentality here, this unconventional portrait presents us with a woman who has a lot to say about heroism. No, it’s not a bad word. — Eve Charrin, Marianne

A dense and vibrant tale, almost a request that the reader will take the torch so that this great, living face will remain deep in every mind. — Françoise Dargent, Le Figaro Littéraire

An intense account that analyzes, imagines, persists, questions, shocks as much as it teaches about the fiery mosaic of a region that has seen the miracle of Palmyra on the desert dunes. — Christophe Ono-dit-Biot, Le Point

What place is there for literature when the reality from which it is inspired carries such crucial stakes? It is to dignify reality and restore justice to it, ARDOUR is what succeeds this end to the Syrian Revolution. — Christophe Ayad, Le Monde des Livres

A serious and impassioned account. We discover a figure of courage and rectitude that will leave you flabbergasted in a Dantean way. A must-read that deserves a place on the shelf next to Yassin al-Haj Saleh, Moustafa Khalifé, or Samar Yazbek. — Salim Jay, Qantara

ARDOUR is a book of real beauty and real relevance. — La Provence

Nothing, ever, will stop it in its duty to the truth, to justice, and to memory. And yes ARDOUR is not a pompous hagiography. With ARDOUR, Justine Augier comes to the forefront with the strongest, most loyal and necessary book of the season. — L’OBS, Jérôme Garcin

Beyond this portrayal emerges a Syria before and during the revolution, through various voices that she weaves like a web full of gaps, inevitably holey, of an unimaginable war. — Mazarin Pingeot, L’Express

Done with “ardor” but also with audacity and labor. We need Justine Augier to retrace the journey of a Syrian Revolution icon that she discovers after the forced disappearances. Both an edifying read for anyone unfamiliar with the conflict that has lasted seven years, and a painful reminder for those that lived and followed the stages of a revolution suppressed, forgotten, and betrayed. A colossal work and documentary. — Hala Kodmani Libération

A deeply moving text. The beautiful book is fragile and scrupulous. The life, battles, and the disappearance of Razan Zaïtouneh dictated to Justine Augier brings to light the figure of a young woman that only few know to this day, the attentive observers of the Syrian situation. — Nathalie Crom Télérama

On the night of 9 to 10 December 2013, Razan Zaitouneh, a human rights campaigner, was abducted by an Islamist armed group and nothing has been heard from her since. Born in 1978, the same year as Razan, Justine Augier is a writer. The Lebanon hostage crisis is the backdrop to her childhood and central in shaping her conception of Razan’s disappearance and the Middle East as a whole. Upon reaching adulthood, she dedicates herself to humanitarian work in the region and in Afghanistan in particular. This book is the place where these two women are brought together in the imagination.

Justine Augier reconstructs the portrait of a young woman who did not believe in heroism, and through her she explores the shattered jigsaw of the revolution in Syria and the ongoing criminal act which that country has become. It is the story of an investigation and a private obsession, and the sharing of a sense of giddy vertigo. It is an immersion in the history of the present, blended with a reflection on personal engagement and language.