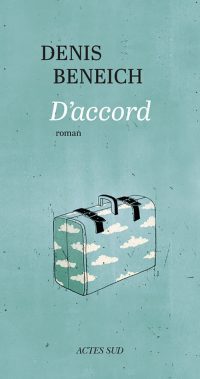 A man visits his ageing father (something of a concession in itself) and takes his young adult son with him. He feels guilty about imposing on him this visit to a sick man, but the son, when faced with the silent void which the illness alone (the erasing of mind and memory) cannot quite explain, decides to confront the situation directly.

Out of this very simple scenario, stripped back and yet pregnant with the privations and absences of a lifetime, Denis Beneich produces an intimate portrait of how communication between generations can break down. It is an intensely human study of surmounting emotions and finding respite in humour which offers a subtle and welcome antidote to the violence which defines the family history. D’accord shows that another way of communicating is possible, and the result is a playful exercise in escapism, imbued with the poetry of the twilight.

Denis Beneich‘s first thriller (Softwar, Robert Laffont, 1984), which he co-wrote with Thierry Breton, was extraordinarily successful.
He has written six other novels, including Le Sérieux des nuages (Actes Sud, 2010), and he is also a translator and an editor. He was in charge of the Nouvelles Angleterres collection at Balland, which introduced to a wider French readership authors such as David Baddiel, Nicholson Baker, Stephen Dixon, Dave Eggers, Rupert Everett, Tibor Fischer and Edward Saint-Aubyn.