Alexis Vassilkov, or the Turbulent Life of Maupassant’s Son 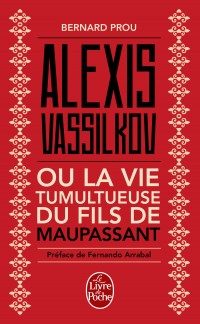 Alexis Vassilkov, or the Turbulent Life of Maupassant’s Son

“A real page-turner, with diabolical suspense that makes it impossible to put down. An absolutely fascinating book written in a precise, elegant style. A real find. Run out and grab it, this is one of the best books of the year.” – Gerard Collard

The unknown story of Maupassant’s son.

Shortly before he died, Guy de Maupassant had a last fling with the Russian painter Lioubov Andreievna Vassilkova. The trials and tribulations of Alexis, their unrevealed son, lead him to revolutionary Russia. The young doctor soon becomes a part of Stalin’s entourage and winds up getting deported to the Mirny gulag, in Siberia, where he gets initiated into a clandestine Masonic lodge. A combination of political commitment, good luck, the occult support of a Yakut shaman and the love of the beautiful Ayami, bring him back to the freedom of his childhood in France. In 1940, Alexis joins the Resistance in the scrublands of the Haute-Loire region. The adventures of Alexis Vassilkov, an exceptional character who the playwright Fernando Arrabal described as a Strogoffian hero, who was involved in the most turbulent events of the 20th century, until well after World War II – told in a colorful, sweepingly epic style.