A Saturday Evening Among Friends 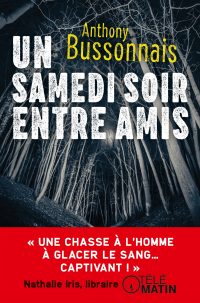 A Saturday Evening Among Friends

A book that will freeze your blood! — Nathalie Iris, Télématin

For his first novel, Anthony Bussonnais doesn’t go in for subtleties: he does not hesitate over mixing a thriller and a noir novel — Jacques, Librairie le Baobab, Braine l’Alleud (Belgium)

My favorite, 100% noir. […] Anthony Bussonnais sets the tone from the start; it will be creepy, raw and above all intolerable! — Giliane, Espace Culturel E. Leclerc, Rouffiac

When comes the weekend, everything is possible… even the worst.

Claire, worried, checks her phone again. It’s past eight and her boyfriend, who’s supposed to come and fetch her, is nowhere to be found. They’ve been dating for six months now and Claire knows him well. Medhi’s always on time.

François is always meticulously organized. It’s thanks to him that the Saturday night parties became the must-be event which his neighbors, carefully selected, wouldn’t miss for anything in the world. The perfect moment to relax…

In the midst of the woods, Medhi is naked. Shaking. In spite of the darkness, he spots several people around him. They all seem to be partying, bursting into laughter… but what do they expect from him?

Anthony Bussonnais was born in Maine-et-Loire and works in a co-op. In 2016, he wrote his first thriller, which he self-published the following year. In 2019, he was awarded the Kobo prize by Fnac-Préludes-Le Point for A Saturday Evening Among Friends (Un samedi soir entre amis).