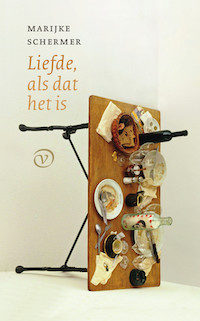 Marijke Schermer (1975) is a playwright and a novelist. Her plays were performed by various famous theatre companies and have been translated. Her first novel, People in the Sun, was published in 2013 and was voted ‘best debut’ by Trouw. Her second novel, Debris, was published in in 2016, to much acclaim, and was translated in Danish (Grif), German (Kampa Verlag) and Spanish (Alfaguara).