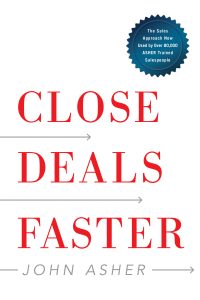 In his first career, John Asher was captain of two nuclear-powered fast attack submarines. In his final job in the Navy, he was the program manager of a billion dollar software development program. In John's second career he co-founded an engineering company that grew at a 42% per year growth rate compounded for 14 straight years. Along the way, the firm acquired seven other companies and John gained key insights into what it takes to develop a fast-growing business where everybody in the company is in sales. In his third career, John started a sales and marketing advisory business to share the lessons he learned from being on the front lines of selling complex sales for over twenty years. He and his team have trained over 70,000 salespeople in 22 countries on his efficient and effective sales process to quickly close new business. He is a managing director of the Business Growth Alliance and Headwaters, S.C., a midcap investment banking firm, and is also a special advisor to the private equity divisions of Goldman Sachs and Indian Rivers Advisors. Over the last two decades, John has mentored a large cadre of speakers and trainers that have fueled the growth of ASHER. He is a recipient of the Lifetime Speaker Achievement Award for extraordinary contributions to Vistage, an international organization of CEOs. He lives in Washington, D.C. 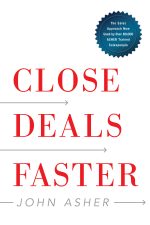 Close Deals Faster​. The 15 Shortcuts of the Asher Sales Method